This pop-up exhibition is the result of my participation in the Prairie Ronde Artist Residency series here in Vicksburg, MI. The programme was established as part of the Papermill renovation project.  The drawings were carried out both onsite at the mill, and in the Hills Pharmacy as the idea for the show was developed.

It was fascinating to finally visit a papermill building, I had already seen many in the area. In Parchment, Kalamazoo there is a huge abandoned factory that I was very curious about when I first saw it, but was warned it was difficult to get into and dangerous. Having been such an important industry in the region I was sure there must be an opportunity somewhere. So, on reading about this residency programme I could hardly contain my enthusiasm, and it was very rewarding to be admitted.

My initial reaction on visiting the mill was admiration for the early industrial architecture, as in the specialised designs for the work spaces required at the beginning of the last century, with so many windows to make the most of natural light.  The beautiful wooden beam structure of the top floor of the East wing, which allows overhead light in through the roof with north facing windows, would make the perfect studio for any artist.  And it goes to show the attention to detail for producing a high quality product, since it was here that the cotton rags were first sorted before washing and beating into pulp.

My first visits with John Kern as a guide were essential in uncovering the past of this huge factory, which continued operating until the beginning of this century. In a kind of forensic architectural voyage I tried to imagine the atmosphere and processes in the different factory areas.  A visit to the local Historical Society was key, where an abundant photographic archive was available for consultation.  This treasure of a museum stands testimony to how integral a part of the village the mill had been, connected to the lives of so many people, all the way to Poland bringing new workers, and even down to documents detailing the stones brought for the first mill established at the creek when it was still part of indigenous land. 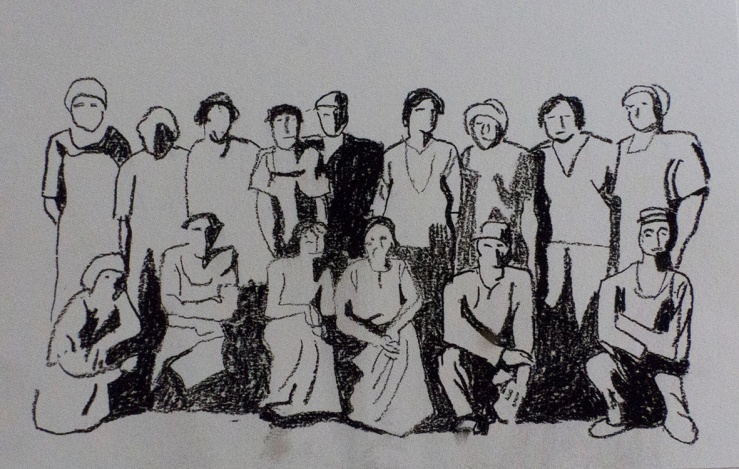 And then the mill itself.  As I drew the exterior of the building I looked to trace out evidence of the changes that had occurred over time. They could be seen in the ghost outlines of windows bricked over and new doors inserted, or buildings added on. 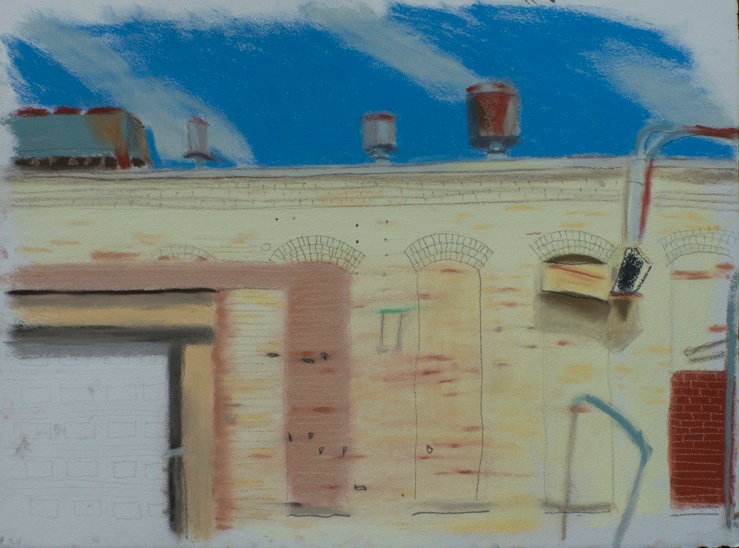 Even now the building has a nobility that allows it to be refashioned for new purposes in an innovative urban renovation programme. Being such a well-designed and solid structure with its massive brick walls, it still makes for a very sturdy foundation from which to rebuild and accommodate changing needs.

It is exciting to be able to document the remnants of the past while on the verge of complete transformation.  As an ecologist at heart I find it comforting that we can reuse much of what has already been built, a necessary change in our culture in the face of rampant climate change already unleashed. 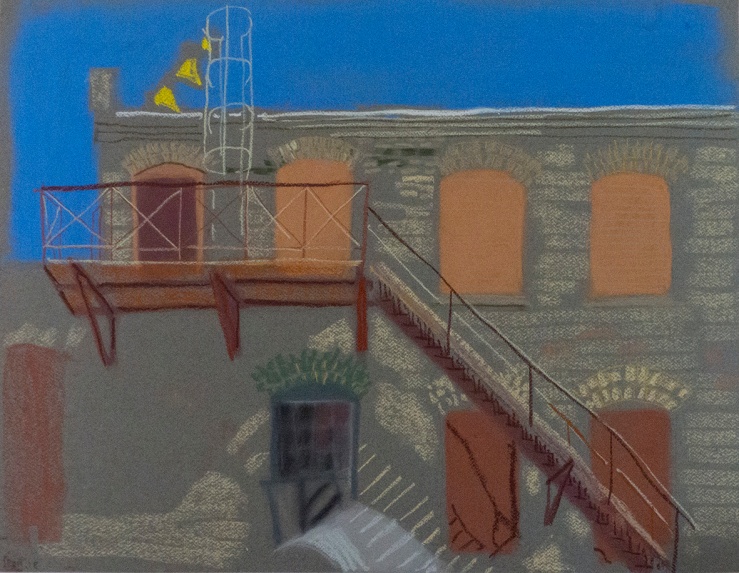 As I approached the building from afar I would imagine different identities through changing appearances. From a distance, while admiring the trees in the grounds, it almost took on the look of a stately old home so typical in the English countryside. Maybe it has more to do with the ample green areas surrounding it, an expansiveness which everyone is so used to here here, whereas in England space is so much more restricted. 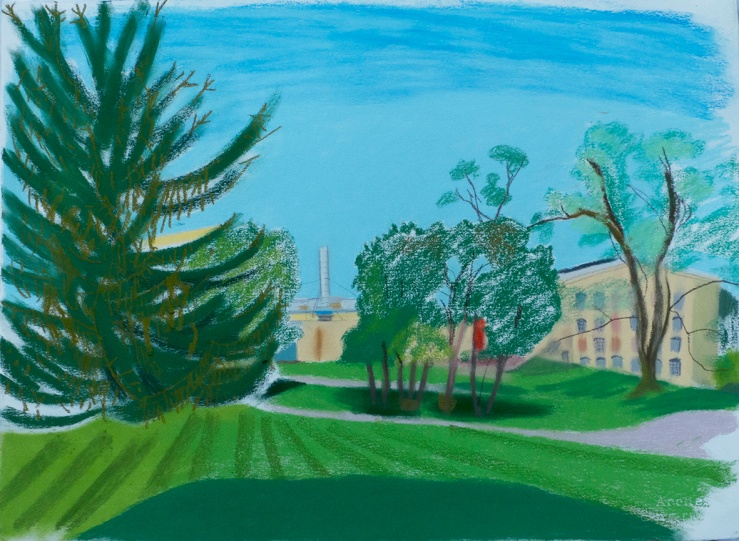 At other times in the last days of summer it had the air of a Tuscan Villa. 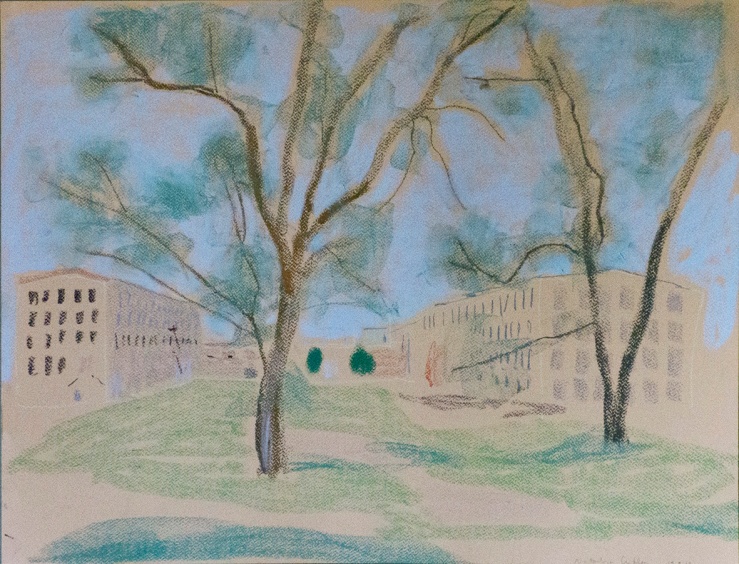 From my work in an industrial city in South-east Venezuela I developed a particular taste for utilitarian structures that attest to human endeavour, disastrous though they may be for the environment. I thought back then (early 1980s) that since our whole lives were so dependant on manufactured goods, and how everything we touch has been processed in some way or another, that you had to look the beast right in the eye.  Somehow chimneys became a special favourite. 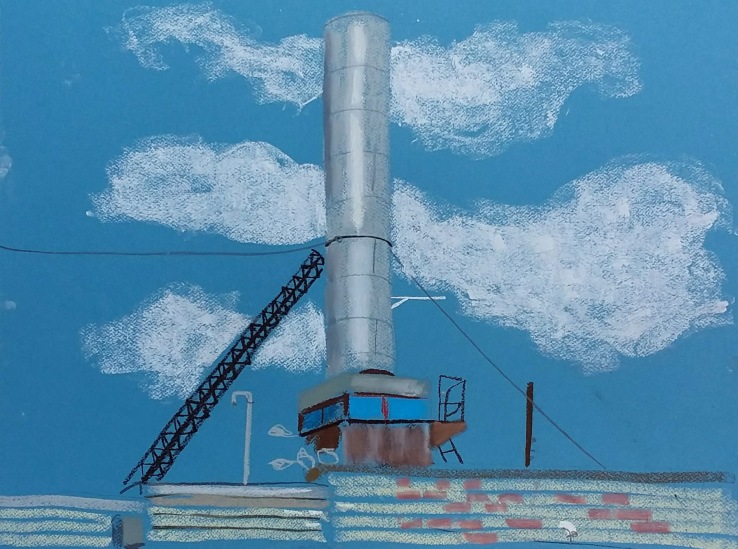 The field work drawing at the mill I likened to an artists picnic, sitting outside drawing in the grass. Then I began exploring inside and finally we decided to hold a small pop-up show at Hills Pharmacy in downtown Vicksburg to share the results of this initial engagement with the mill, the village and a little bit of local history. 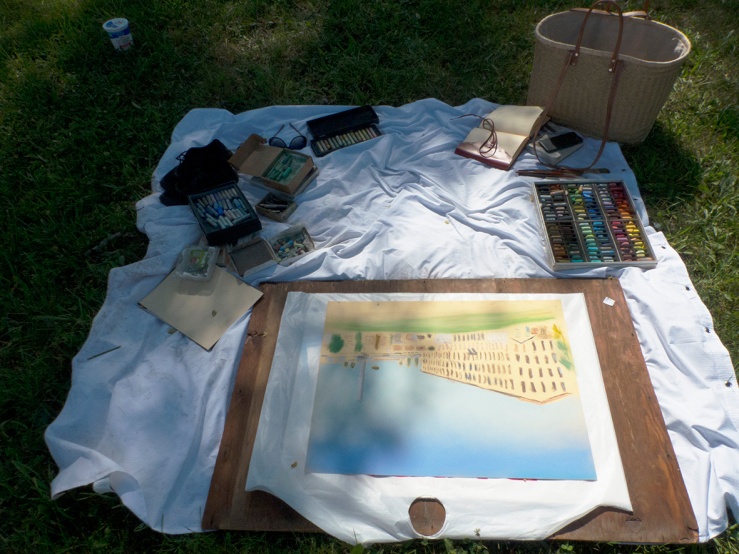 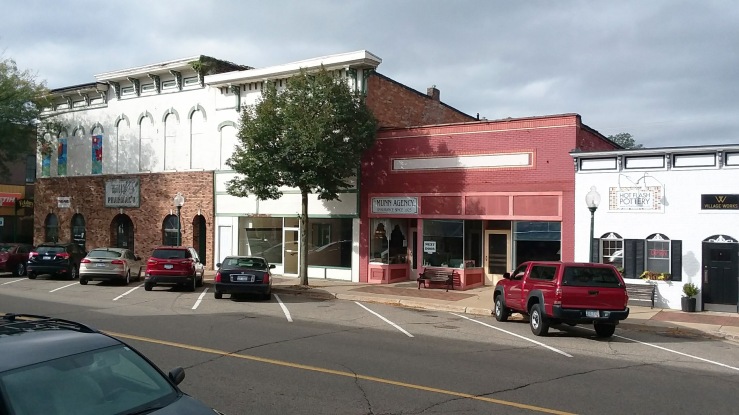 In the ample downstairs room of the Pharmacy the space was perfect to hang a simple show, while upstairs there is a dance hall that seems to date back to the 50s, a museum piece you almost wish could be preserved untouched.

I began to spread out the drawings thinking how they could be pieced together to do some kind of visual justice to the scale of the mill. I was very drawn to the rhythm of sturdy yellow columns that marched through the long workrooms, mostly huge old oak tree trunks that bare the marks of years of use but still hold up the heavy duty floors so sturdily. 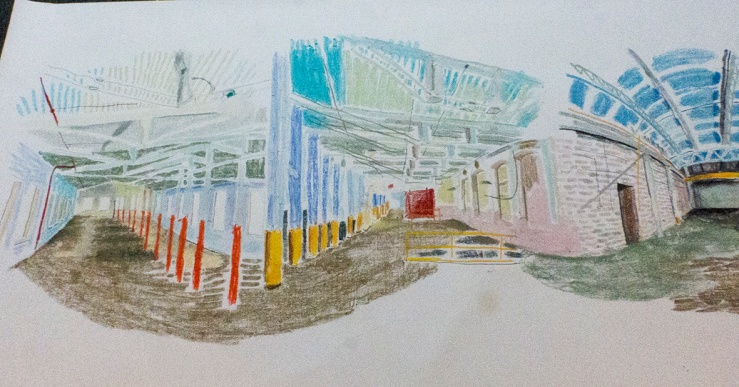 As an aesthetic idea the train of yellow and sometimes orange and red bars was the key element in making a large panorama of the building and it’s internal spaces. In drawing the wide views in elliptical shape and joining them up, similarities to the well-known image of the DNA double helix emerged.

So that was how I came to the idea of the long drawing (900 cm) as the DNA of the paper mill. But before arriving at the final representation, I also considered including many more elements, photographs of the people and machinery going back to the 1920s, graphics from the 1950s guide book and so much more that could build a narrative about this fascinating place. In the end the views of the building were so busy in themselves I decided the other sources would have to wait. 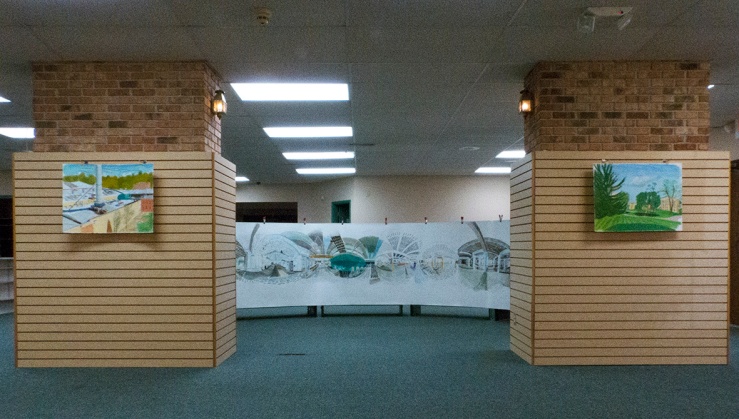 One thought on “Papermill DNA”